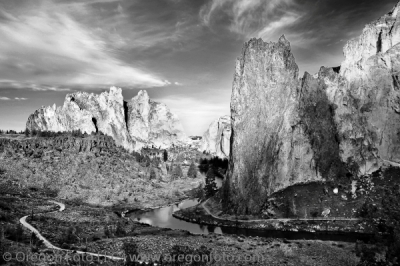 Located in Terrebonne, Oregon, outside of Redmond, Smith Rock is widely considered a rock climbing mecca with over 500,000 annual visitors. Generally regarded as the birthplace of modern American sport climbing the park hosts top cutting-edge climbing routes. There are countless climbs in the park with more than a thousand being bolted routes. The park contains the first U.S. climb rated 5.14 (which is extremely challenging). The area is well-known for its challenging climbing routes so eventually most top climbers visit the park. Smith Rock State Park encompasses approximately 650 acres of the Oregon High Desert.

The park is named after a U.S. soldier who fell to his death from the highest promontory (3,230 feet) in the configuration making up the area. Smith Rock’s most famous feature is “Monkey Face” a 350-foot tall natural rock sculpture climbed by thousands which looks like a monkey’s face and has become an iconic symbol of the park.  The formation contains some of the most difficult climbs in the world, including “Just Do It” (5.14), and the super thin “East Face” crack (5.13).  Another highlight of the protected area is the 550-foot Smith Rock that towers above the park.

The dramatic appearance of Smith Rock is due to major volcanic activity millions of years ago and the subsequent weathering of the landscape from countless years of rain and wind. After a period of localized eruptions, lava flows entered the canyon and crowded the ancestral river into the flanks of the main volcanic structure. Forced to establish a new channel, the Crooked River eventually eroded the interior of the volcanic vent. The multicolored formations in Smith Rock State Park are composed of rock known as “welded tuff” -volcanic ash erupted under conditions of extreme heat and pressure. The picnic and campground areas sit on top of the rimrock, which is made up of columnar basalt.

There is a popular loop hike around the park which is considered a moderate hike at 3.6 miles and approximately 900 feet gain in elevation.

Although considered moderate, roughly 700 of that foot gain is just 0.5 miles up the Misery Ridge Trail and then another 0.50 miles going down 700 feet. So it is certainly a nice elevation gain that is packed into a short distance, and therefore, can be a little tougher than expected for many hikers. It is recommend to hike the loop counterclockwise for comfort and better views of climbing routes and the meandering Crooked River. In addition to the loop hike, seven miles of well-marked trails follow the Crooked River and wind up the canyon walls to emerge on the ridgetops. Other hiking trails include the 0.5-mile Burma Road Trail and the 1.6-mile Canyon Trail.  The Summit Loop Trail is a 2 mile connector trail that links the River Wolf Tree and Burma Road trails creating an 8 mile loop.

Most of the trails intersect with other trails so you can add on distance. Beyond the marked and frequently traveled trails inside the park, there is also a backcountry that can be hiked and explored filled with sagebrush and classic high desert scenery prime for photography. Gray Butte is a popular hiking area which is part of the Crooked River National Grassland and is a peak Just north of the Smith Rock State Park. The hiking trail can be accessed from the park by following the trail on the north side of the Crooked River to a trail leading up a draw connecting to Burma Road.  Gray Butte dominants the skyline and the trail leads to Creson Viewpoint that provides hikers exceptional wildflowers and views of the Cascades, Ochocos, and the high desert.  To view the wildflowers, the hike is best in the Spring, where early May and June can produce a strong display of colors.

Since the entire area is delicate and extremely sensitive to erosion, it is important not to blaze any trails because they may leave visible scars for years to come. Being Central Oregon’s high dessert, temperatures surpass 100 degrees in the summer months and the rock walls feel like an oven radiating back the Sun’s heat.  In wintertime, the thermometer stays close to the freezing mark during the day. Spring and Fall are the best months for outdoor activities at Smith Rock.

The campground at Smith Rock State Park is a walk-in campground and open all year-round for visitors. However, overnight camping in vehicles is not allowed. Limited space in the campground is available on a first-come first-serve basis as reservations are not accepted. 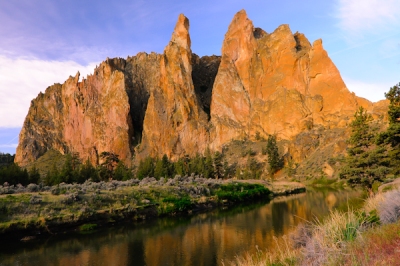 Considering the dry, fragile landscape, only white gas or propane stoves are allowed for cooking due to widespread fire risk. Campfires are not allowed anywhere. Be sure to bring battery-operated lights as gas lanterns are prohibited. Vault restrooms are available near the camping area. This is definitely a pack-it-in, pack-it-out campground so be sure to respect the area because Smith Rock is a very high use park and already has countless visitors stacked against its pristine environment. There is also camping available at the Skull Hollow Campground located 8 miles east of Smith Rock.

Not just a destination for rock climbers and hikers, Smith Rock also offers miles of mountain biking trails and also makes a great stop for a picnic with the family. Winding around the park is the truly majestic and looping Crooked River offering many top photography shots. The wildlife is abundant inside the park and the surrounding area too. Plan on seeing mule deer, river otter, golden eagles, rabbits, ducks, Canada geese, hawks, and rattlesnakes to name a few. Smith Rock is a sanctuary of high-rising rock spires and other geological formations which create an outstanding view for the landscape photographer and the Oregon hiker. Slightly reminiscent of Yosemite National Park, the geological formations are Oregon’s mini-version of other state’s mighty rocky landscapes. Due to the diversity of recreational opportunity, Smith Rock State Park is a top destination in Oregon for hiking and photography.

Drive Highway 97 to Terrebonne which is 6 miles north of Redmond, Oregon. It is easy to follow the “Smith Rock” signs where you turn east for 3.3 miles of zigzagging paved roads to the various parking areas. There is a $5 per car fee, restrooms and water are available. Due to the uniqueness and fragile aspect of the park, park rangers enforce the animal leash law and strongly encourage all park users to stay on trails.

Oregon Photo Guide™ features the landscape photography of Michael Skourtes, Portland Oregon photographer and avid outdoorsman. I venture throughout the state searching for the top destinations for Oregon hiking, backpacking, camping, and photography. I share my experiences and photography of Oregon on my guide. I encourage you to explore Oregon and make your own outdoor adventure.

For picture galleries featuring Oregon photography, or to contact me, visit www.photographyoregon.com. 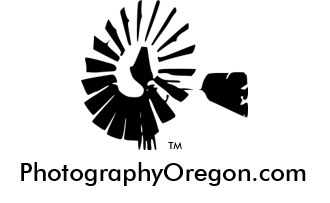